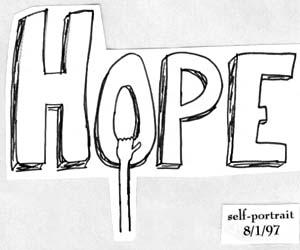 Somehow I’d gotten involved in some kind of insurance scam where I would be killed. Temporarily. I’d get some kind of lethal injection, I’d die, and these Thugs would get some money somehow. Then, later, using some method that was never really explained, they’d bring me back to life, in secret somewhere.

It sounds cheesy now, but it was completely believable at the time. Asleep I hardly noticed the La Femme Nikita similarities.

We did a test run, and I was successfully killed and revived.

And I enjoyed it. Seriously. Dying, it turns out – at least the way it felt in the dream – is the most peaceful, relaxing feeling I’ve ever known.

As usual, it got weird then. I somehow got involved in a sting operation to trap my lethal injection buddies on behalf of the law. They figured it out and came after me.

For no apparent reason, there was a woman I’ve never seen in reality who was with me through every step of this (except the part when I was dead). We tried to get away. The Thugs I’d been involved with were now apparently willing to just shoot both of us, without messing around with that whole ‘reviving’ part anymore.

It was all very creepy, and absolutely fascinating, and I kept trying to dream my way back to it after I snoozed the alarm.

I never got back there — but last night was the most relaxing night of sleep I’d had in months.

Which leaves me more than a little nervous about the entire experience.

I’ve seen this episode of Law & Order before, it’s the one with Werner Klemperer, so I’m flipping around instead while I eat lunch before work.

I stumble onto the Ricki Lake show on FOX. Today’s topic: “I’m 12 And I Flaunt My Chest.” Early – as they say – bloomers, who like to show off what they’ve got, and the family & friends who are upset with them about it.

I don’t stay on this long. The flipping resumes.

Nothing interesting on, so I’m looping around for a while. Next time I flip past FOX, Ricki Lake is in a commercial break. I get there just in time to see an ad for “Bloussant.”

It’s just like the line at the grocery store. Many cashiers, although here we all go through a single feeder line to get there.

We stand here with our selections, fidgeting impatiently, while our eyes scan the room, looking for familiar faces, glancing at our watches, desperate for any diversion to help kill these few minutes, before we hand over our hard-earned money for our purchases.

So much time for each of us to kill.

If only we had something to read.

While we wait in this line.

Here. At this bookstore.

I had loaded up a disc of my own music — a demo of the Brodsky medley (two versions — one without vocals, for practice while driving to Philadelphia) and the Duct Tape contest entry. I just wanted to make sure the disc played OK before I sent in the Duct Tape stuff and went on the road.

The software seemed convinced that it could identify the material on the CD, and these were its best guesses. I can’t say I ever expected to be compared to Paul Shaffer or the Oak Ridge Boys.

I used the word ‘polyrhythms’ today at a baseball game. Am I a complete snob?

…This is when she walks in with David, who knows the whole ugly history and quickly disappears, leaving us alone in that office under the stairs, and I smile although the gut area is starting to feel like the wound I thought had healed is opening back up, and she says they went to lunch to kill some time until I came in so she could say goodbye, and I’m thinking what I should have done was call in sick for the whole day and leave the house, and she reaches up and gives me what would normally be a great hug, which I return less than half-heartedly, maybe quarter-heartedly at best, and I close my eyes and she says the same stuff I’d read earlier, the stuff that’s now in that garbage can at home, and she’s all clichés now about how she’s sorry it turned out this way blah blah, and she’s going to miss me blah blah, and my mind is flipping around to see if there’s something less predictable on some other channel, and she’s sniffling a little and she’s gotta go and she’s playing to the imaginary crowd, and finally I say the one thing I will say to her that day, just a few words, the only thing I can come up with, and it’s the last thing I’ll ever say to her, I hope, and four years later I’m proud to say it still is, and four years later I still think about her every single day and desperately hope I never see her again because deep in that metaphysical place I know I really want to, and four years later I’m still not sure why I said it, I had to say something, but I don’t know why that’s all I could think of, and I wonder if she remembers how she said goodbye and all the pleasantries afterward, and I didn’t say anything else, just smiled and watched her finally getting the hell out of my life, and it really was an odd thing to say, not the kind of thing you’d see in a script somewhere but absolutely perfect, that simple, honest sentence, beautiful in its sincerity and a fittingly pathetic whimper for the whole thing to go out on.