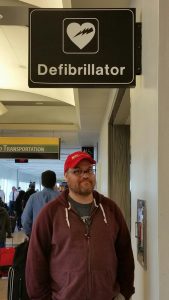 December 7, 1941 was the day Japan bombed Pearl Harbor, launching the US into World War II.

December 7, 2015 was the day I had mine: the implanting of an Internal Cardioverter Defibrillator.

The ICD – call it a defibrillator, a defib, The Little Box That Lives In My Chest, or The Reason I Have That Little Scar Below My Collarbone – is still there, connected to my heart with a couple electrical leads, monitoring the situation. If my heart rate ever drops way too low, or accelerates way too high, its mode switches from MONITOR to ZAP, delivering an electric shock to reset my heart, which will ideally put things back to normal.

It doesn’t shout “CLEAR!” before delivering that shock.

I found that out for sure about a year and a half ago, when my heart rate suddenly skyrocketed one spring morning – new personal record: 261 BPM – and because this little box does exactly what it’s supposed to do, I’m here to tell that story.

So Happy Defibriversary to you, Little Box That Lives In My Chest. Here’s to many more years of MONITOR, with as little ZAP as possible.

My original blog about my diagnosis and ICD: My Heart May Or May Not Go On

My blog from March of last year describing that time I got the ZAP: My Heart And The Real World

Specifically, around 9am, while opening shutters to look out the kitchen window, I suddenly needed, then received, my first automatic shock from the little defibrillator that lives in my chest.

(note to self – write children’s book: The Little Defibrillator That Lives in My Chest)

You see where this becomes an issue.

(for more of this backstory, start here)

Since my diagnosis, I’ve been on medications to lighten the load on my heart, and in December of 2015 I was implanted with an Automated Implantable Cardioverter/Defibrillator (AICD). It has faithfully resided near my left collarbone ever since, monitoring and tracking my heart’s behavior and keeping stats, uploading data to be analyzed by the team at my cardiac rhythm specialist’s office, waiting for a time when my heart rate would drop extremely low or rise extremely high, when it would kick in with a jolt to reset my heart’s rhythm.

I’m typing this because that’s exactly what happened on March 11.

I stepped to the window to open the shutters, felt my heart suddenly start racing, felt a little lightheaded, felt VERY lightheaded, and had time to briefly think I might be about to lose my balance or pass out.

The next thing I remember is waking up in a pile on the floor.

Gloria was standing nearby when it happened, including the part where I apparently reacted verbally to the shock, with an “oh!” that I don’t remember. She saw me go to the floor in medium-slow motion, first slowly leaning back onto a cabinet and slowly lowering toward the wall beside, until I just dropped the last few feet. My eyes were open the whole time, but I wasn’t consciously experiencing any of it.

I woke up quickly after hitting the floor. Gloria called 911, and within about 2 minutes the EMTs were in the house checking me out. We told them what we each saw and experienced, and our theory that I’d perhaps gotten a defibrillation. My chest didn’t hurt, which I’d expected, and I never felt the shock, but the circumstantial evidence seemed pretty conclusive.

My blood pressure was pretty high (for me) when they first checked it, and I was sweating buckets, but both soon started to ease up. After a quick EKG, I changed into “leaving the house” pants and walked, with help, to the ambulance. Within 30 minutes of opening the shutters, I was in my own room at the ER.

The ER tag teams – I saw no less than 10 different nurses, doctors and specialists – did lots of tests and blood work, another EKG, an x-ray, and a technician came in to interrogate my defibrillator.

(note to self – write industrial/metal song: Interrogate My Defibrillator)

Sure enough, just before the defibrillator zapped me, my heart rate – normally around 75ish bpm – spiked up to 261. The defibrillator noticed, and administered a shock to reset it, and it started beating normally again.

In other words, The Little Defibrillator That Lives in My Chest did exactly what it’s supposed to do.

I mentioned to the technician that, a couple of times in the last 6 months or so, I’d felt a very brief similar heart-racing feeling, so brief I didn’t think anything of it at the time. He looked at the data and was quickly able to tell me the exact dates – one in October, one in December – right there in the readout.

The Little Defibrillator That Lives in My Chest has a good memory.

I spent about 4 hours in the ER, returned home by dinnertime, and took a few days off work. The ER doctor added a new medication to my daily routine, one that’s supposed to help keep my heart from getting into that state again. A few days later, I had an in-person checkup at my cardiac rhythm specialist’s office, and a few days later got my new ‘restrictions’ list: no driving for 6 months (rideshare companies, prepare to love me), and no air travel for 2 months.

Because I asked about air travel, they were careful to clarify that I will never be permitted to fly a plane myself.

(note to self: change plans regarding flight school in no way whatsoever)

As I type, it’s been almost 2 weeks since that Sunday morning, and I’m feeling good. Although it did take a couple days until I was comfortable opening those particular shutters again.

My energy for the day-to-day stuff is back, I’ve been cleared to return to the gym (which I needed to do anyway), and the only real side effect of the new medicine is very dry hands. Gloria introduced me to First Aid Beauty brand Ultra Repair Cream, available from your local Sephora, which turns out to be wonderful for that.

I haven’t had another shock, nor have I felt my heart flip out like that again. And in a few more weeks, I’ll be walking once again in the 2018 Heart Walk for the American Heart Association. If you’d like to chip in for a great cause, you can do so here:

As we may have previously discussed, I’ve been working on a one-man “talking and singing” show & album about these cardiac adventures of mine. It’s a song or two away from having all of its music written, leaving the visuals and some storytelling bits left to finish. The show is coming together, and I’m hoping that by the end of 2018, it will be ready for public consumption.

This month that show gained some new material.

More importantly, it did not gain an ending.

December 7 is a lot of things.

It’s Pearl Harbor day, the anniversary of the attack that brought the U.S. into World War II, back in 1941.

And it’s the anniversary of my own first surgery too – December 7, 2015. That’s the day I was fitted with an ICD: Internal Cardiac Defibrillator.

That’s right: today is my defibriversary!

Two years I’ve had this little box in my chest – two years in which it has had to do nothing but sit there taking readings. And give me something to warn airport screeners about. And give me a reason not to keep my phone in my shirt pocket, or hang headphones around my neck.

One thing it HASN’T had to do is to defibrillate me.

I had a fresh echocardiogram recently. No surprises and no changes – my numbers are the same as they were two years ago, the same as they’ve been since I was diagnosed in August of 2015. That’s when I found out that the reason I’d been coughing non-stop all summer had nothing to do with my lungs, and everything to do with my heart. Specifically, severe dilated cardiomyopathy. Sounds bad, right? Well, it’s not really about numbers, it’s about quality of life, and I can’t really complain about that these days.

It’s been more than two years now since I found out I have it. Most likely I’ve had it for at least twice that long – I can track early symptoms at least as far back as December of 2013. December 10, specifically, so almost exactly four years now. I remember coughing uncontrollably through an otherwise thoroughly enjoyable Mike Keneally Band set and a wonderful Dismemberment Plan reunion set, during that week’s work trip to San Francisco.

At the time, I thought the coughing was caused by too long a walk up and down too many of the city’s hills with my luggage, on the way to my hotel on the chilly night I’d arrived.

It’s been four years since that work trip to San Francisco, and two since I got this little metal thing installed. I don’t think about it much, sometimes I forget it’s there. Then a cat steps on it while I’m lying in bed and I remember very quickly.

But it’s just been sitting there, minding its own business, for two years, and I’m thankful for that. Hopefully we can keep this streak going for a good long time.

If you’ll pardon me being not all that funny for a minute, I’ve got a fairly major update.

There are some reasons.

I spent most of the year living with a life-threatening heart condition, which I had for months before I knew what it was. I still have it, under tighter control now, and things have been moving in a positive direction for some time.

I’ve been quiet about it online – some people know a little, some know a lot, most haven’t heard much, so I wanted to put some words on paper/web. I’m not asking for positive vibes, thoughtsandprayers, or anything else, although they’re appreciated, just posting this out of a desire to share information.

I’ll be back on some stages and in some recording formats soon. Big plans for the next few years – hoping they’re a bit kinder than their recent predecessors. I plan to find out first-hand.

(cue “The More You Know” PSA music, then click here to read the whole story)

This Machine Kills Fashion: Either Tulsa's funniest musician or its most musical comedian, Acoustic Ross has written & performed original AntiFolk & comedy music for 20+ years. He has released 5 albums, served (since 2010) as house musician/jester in The Crispy Family Carnival, & played nearly 400 shows in venues of all sizes, ranging from Cain's Ballroom to a school bus.

Check Out My Other Gig