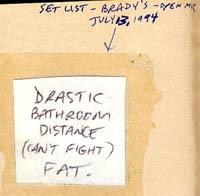 In June 1994 I was living in Steubenville, Ohio. On a trip to Kent to visit Mark, Ted, and Dave, I somewhat impulsively bought an acoustic guitar.

Within two weeks the acoustic Vaguerants were onstage at Brady’s open-mic night. We had fun, and no one ran out screaming.

From then on, anytime I had a Wednesday off I drove the two hours back to Kent for the open-mic. If anyone else had the day off, we played as the Vaguerants. If not, I went solo.

In February we played our first non-open-mic gig. It was our fifth show, and our fourth lineup. Come to think of it, that was our first real gig, our first road gig, and also our last gig: in May I moved to Missouri, and that was that.